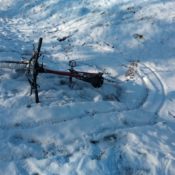 Had one of my best commutes of the year today. I’m lucky enough to have a MTB and used it to ride down through Ladywell Fields off the paths. The snow was the deepest we’ve had for nearly ten years and I made the most of it. In fact, I left an hour early and just rode up and down those little hills in Ladywell Fields as many times as I could. Skidding and sliding and laughing my head off.

After the flurry of activity to get the best bits of Quietway 1 finished in our borough, (although Childers St and the Deptford High St crossing still isn’t done; we’re keeping our eye on those,) you may think things have gone a bit quiet on the Campaigning front. Not so. We still carry on working to keep safe space for cycling a key part of both the council’s and TfL’s transport policies.  It’s not an easy job, and we always

At the end of the summer, you may remember that we carried out a survey aimed at finding out what users of Quietway 1 felt about it. Qe also wanted to see who was using it, whether it had attracted new users.  We carried out the survey during the evening peak hours and, although we had a lot of respondents, felt that the category of cyclists mostly around at that time would be commuters.  We’d like a wider range of

Lewisham Gateway: A New Junction Fit For the 21st Century? 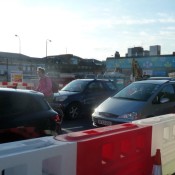 “It is unbelievable that in 2015 junctions are being redesigned from scratch that don’t properly take account of the needs of cyclists and fail to provide a safe, segregated route. Cyclists shouldn’t be expected to dice with death every time they go through Lewisham Town Centre and the Lewisham Gateway junction needs an urgent rethink.”   This is what Darren Johnson, Elected member of the GLA and chair of the GLA Environment Committee told us.  He’s absolutely right and 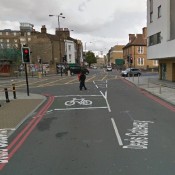 Some of you might remember this, over 2 years ago now, We made a couple of videos at this junction to prove to TfL just how dangerous their decision to make Deal’s Gateway share a green light with oncoming traffic from Greenwich High Rd was. Traffic turning right from Greenwich High Rd just didn’t seem to be aware that they needed to give way to traffic moving straight ahead across the junction from Deal’s Gateway. The Highway Code seemed not

Lewisham Cyclists invite Lewisham residents to this open meeting to discuss proposals we will be presenting to all candidates in the local elections in May.  These proposals are aimed at improving every ward in the borough, enabling walking and cycling,  making local streets safer and more pleasant for all.  We want these proposals to reflect what local people want, so come along,  have a cup of tea or coffee with us look, listen and say what you think.  You don’t

Waterlink Way: How much longer will we have a safe and traffic free route from Ladywell through Catford?

NB. This route is largely open now, although not yet finished.  The developers have been reasonably good at keeping us informed and sticking to to their promises, with a couple of little hiccups here and there.  Please keep us informed of any problems on the route so we can take it up with them as soon as possible.  The development won’t be finished till 2016.   The section of NCN 21 which runs through Lewisham underneath the South Circular and

Update October 2015:  Read about the latest developments in our attempts to get Tfl to deliver a safe junction for all road users here   Update: May 2015. We are now well in to the construction of the Low H road system in this development.  And have had numerous complaints from cyclists who have to use this busy junction, difficult at its best.  And, it seems, it may well be at its worst at the moment.  We contacted Tfl about

Before Christmas, you may remember that we asked you to complete a survey drawn up by the London Cycling Campaign in which you could draw attention to what you considered to be the barriers to cycling, both in Lewisham and across London wherever Lewisham cyclists ride, or in many cases, would like to ride, but can’t due to the severity of those barriers.   We now have the results of that survey and have begun to analyse them.  One of

I remember when I first heard about The Cycle Super Highways, it seemed a great idea. Fast, safe routes for cyclists, from all around the city to Central London? Honestly? This was heady stuff. When had we ever heard anyone talk like this about cycling in London? The LCN, (London Cycle network) which had promised so much still remained piecemeal, patchy, and was never intended to give cyclists equal access to the mighty, main roads that power straight into our