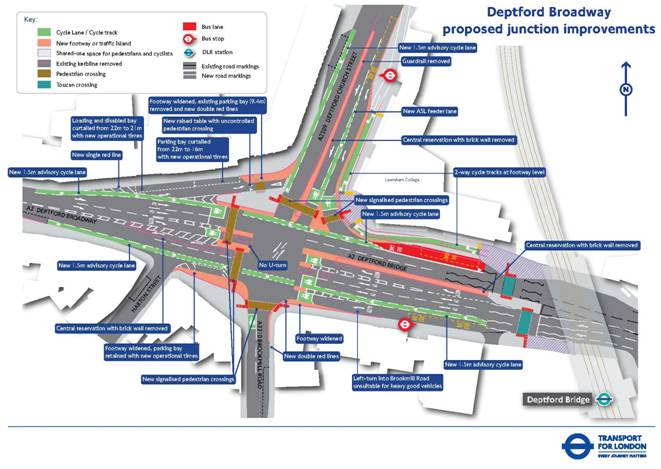 These are the “improvements”.  You can find a clearer, larger map plus further details, here:  https://consultations.tfl.gov.uk/roads/a2-deptford-broadway-deptford-bridge-junction The inverted commas in the post heading should hint that all is not well with us since receiving these.  It will be apparent why they have been inserted when you read our response to TfL.  We urge everyone to respond personally to the consultation, say exactly what you think.  It’s important that as many people as possible respond.

Our group’s response is set out below:

“Lewisham Cyclists met to discuss the plans you sent to us.
Although we welcome the addition of some signalised crossings for pedestrians,
we ultimately agreed unanimously that there is little real improvement here for
any road user.  The lack of signalised pedestrian crossings on the Eastern arm of
the junction is also disappointing, given that, from our observations, this is where
many pedestrians seek to cross, as it is the shortest route from the college on the
north side of the road to the bus stop on the south.  We do welcome the removal
of the brick walls in the middle of the road, something we discussed with TfL
some time ago, but feel that the opportunity afforded by the freeing up of this
extra space has not been used to best advantage.

From our perspective, as a cyclist representation group, there is nothing that
makes this junction in any way safer or easier to negotiate.  And, more
worryingly, there are some additions to the road markings that make the junction
even more dangerous than it is now.

Firstly, the inclusion of a cycle lane running alongside the left turning slip road
into Deptford Church St actively leads cyclists into an extremely dangerous left
hook position.  We suggested to Tfl some time ago that this slip road was totally
unnecessary anyway and would expect it to be removed completely in any new
design.

Secondly, the cycle lane that leads into the bus lane outside the college also
leads cyclists into an extremely dangerous road position due to the large shared
use space at the toucan crossing which forms a buildout, effectively forcing east
bound cyclists, who would be encouraged to follow this line from the cycle lane in
to the bus lane, to swing out at the last minute into the path of motor traffic.  I
have already personally witnessed several near misses for cyclists following this
line at the moment, only to be left in a very difficult position trying to rejoin the
narrowing streams of traffic here.  As a cycling instructor, I sometimes have
trainees who ask for advice negotiating this junction and I always advise them
never to follow this line over to the left of the traffic but to hold the main traffic
lane.  This design places a cycle lane in exactly the most dangerous position for
a cyclist at this particular point of the junction.

Thirdly, none of the cycle lanes are mandatory or segregated.  It is now
accepted that anything less than a mandatory cycle lane does little or nothing to
increase cyclists’ safety.   It should also be noted that Advanced Stop Lines
are no use when lights are already green nor when there is no safe way to
access them.

The off road cycle lane is badly designed as it stands, especially as it runs past
the college weaving in and out of a very busy pedestrian space.  Merely
replacing it without rethinking its usefulness and redesigning it is a missed
opportunity.

In fact, if work is to be done on this junction, we feel the opportunity should be
taken to make some real changes.  Elsewhere in London, Tfl has taken note of
past mistakes and is beginning to take on board more progressive ideas in
junction design that benefit all road users without excessive delay to motor traffic.
Deptford Bridge is a good candidate for this kind of approach as it is a huge
junction with large amounts of road space claimed by motor traffic for no good
reason, narrowing sharply as it does in both directions on the A2.
There is ample opportunity here to remove motor traffic lanes and change the
way cyclists, pedestrians, buses and other motor traffic moves through the
junction, removing some lanes of motor traffic, creating protected lanes for
cyclists, using bus stop bypasses where appropriate and allowing pedestrians
protected crossings on all four arms of the junction.

We have attached a schematic drawing and explanatory text which shows what
is possible here.  This figurative drawing illustrates a design which
enables all cyclist and pedestrian movements through the junction to be fully
protected and segregated from motor vehicle movements. We know elements of
these more progressive ideas are already planned to be implemented at other
junctions in South London e.g. Oval/Kennington.

We are aware that the improvements presented in the consultation have arisen,
primarily, out of the need to make this junction safer for pedestrians.  However,
we feel, as local people, that, if the opportunity has arisen to do something about
this badly designed junction which, to be frank, has blighted the area for fifty
years, then the monies spent should be focused on redesigning it properly and
completely.

We would urge you to take the time to look at our ideas and consider how they
could be applied here. We would be more than happy to discuss these ideas in greater detail.” Only 4 traffic light phases needed for this. They are numbered on the diagram as traffic flows 1, 2, 3, 4. Same number goes at same time.

Cyclists use 2-phase right turns on all 4 arms.

E&W ahead (A2) is dominant flow: more green time may be needed for this

N-bd Cyclists GO ahead safely at same time as vehicles

S-bd Cyclists GO ahead safely at same time as vehicles

S-bd traffic Ahead, Rights & Lefts all GO together

N-bd traffic Ahead, Rights & Lefts all GO together

Consideration could be given to banning right turns out of secondaries ?

In addition, Deptford Bridge may well need bus stop bypasses and the bus stop on the south side of Deptford Broadway may need relocating to the west of the junction to make this possible.

The section of off road cycle path past the very busy entrance to Lewisham College to access NCN 21 (Waterlink Way) may not be needed as cyclists proceeding this way could use the cycle lane crossing in phase 3 of the lights and then a segregated or shared use lane on the South side of Deptford Broadway to rejoin the Waterlink Way by Deptford Bridge DLR station.